CORUM, a key player in the sailing world, now establishes itself in all the major competitions on the circuit. After announcing a double in 2009, partnering alongside team Okalys-CORUM and giving its name to the CORUM Grand Prix (one of the major races of the Challenge Julius Baer), the independent watchmaker is continuing its conquest in 2010, recruiting the talented and charismatic Loïck Peyron and announcing its partnership with the Bol d’Or Mirabaud .

As an official partner of the CORUM Grand Prix and the Okalys-CORUM team, the brand is this year launching an official Grand Prix 2010 timepiece with the Okalys-Corum team colors. In line with the Admiral’s Cup collection, this new timepiece joins the iconic models of the brand. With a titanium case and a dodecagonal bezel in rubber ,the Admiral’s Cup Chronograph 48 provides a dial decorated with monochromatic nautical pennants contrasted by the hour markers, a second hand and two counter’s hands (minute counter at 3 o’clock and small secondmcounter at 9 o’clock) enhanced with the Okalys-CORUM team’s iconic orange color.

Admiral’s Cup Chronograph 48 Grand Prix CORUM – Official Watch of the 2010 Corum Grand Prix: The Admiral’s Cup Chronograph 48 Grand Prix CORUM houses caliber CO753, an automatic-winding mechanical chronograph movement chronometer-certified by the COSC, the ultimate sign of reliability and accuracy. This CO753 caliber operates at a frequency of 28,800 vibrations per hour and has a 42-hour power reserve. The 12- sided case is made of titanium, chosen for its lightness and hardness. Its imposing 48-mm diameter speaks of its power. It has locking pushbuttons thanks to an exclusive lockout system.

These buttons frame a crown made of the same material and engraved with the CORUM key. A black rubber bezel surrounding the convex sapphire crystal anti-reflective coating protects the upper part of the dial, while the screw-down case back, also of black titanium, is decorated with the Grand Prix CORUM trophy. The Côtes de Genève finish of the dial enhances the model’s distinctiveness. Contrasting with the grey dial, the minute numerals are coated with an orange luminescent material and the chevrons are covered with the same material in black. The dial is topped by the words CORUM ADMIRAL’S CUP at 12 o’clock and Limited Edition written in orange at 6 o’clock.

The hour and minute hands are faceted and shine in the darkness thanks to an identical treatment. Assertively placed at the center of the dial, with the CORUM key as a counterweight, the chronograph second-hand is covered with orange lacquer, reminding the corporate colors of the OKALYS-CORUM team. The minute counter hand at 3 o’clock and the small second-hand at 9 o’clock are also coated with orange luminescent material. The date is displayed in a window at 3 o’clock. Representing the signature features of the collection, the 12 nautical pennants highlighting the hours are transferred on the outer dial ring.

Their monochrome appearance is in harmony with the aesthetic of the watch and their arrangement creates a perfect sense of equilibrium. The winding rotor is engraved with the brand’s name, a reminder that CORUM cares as much about the technical quality of its timepieces as about their esthetics. The strap is made of leather with a textile appearance and outlined with orange hand stiching and features a tongue buckle engraved with the brand name. The Admiral’s Cup Chronograph 48 Grand Prix Corum is guaranteed water resistant to 300 meters. This timepiece specially dedicated to the regatta will be available in a limited edition of 25 pieces. 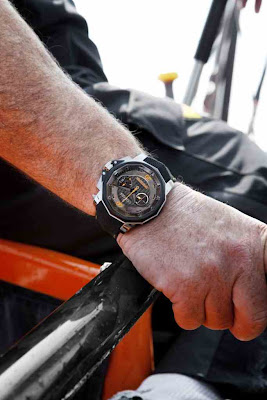 The legendary Admiral’s Cup lives on in this sports chronograph, built for extremes, which embodies the brand’s athletic side.This model will be available at authorized Corum retailers by the end of June 2010 with a retail price of 10’200 Swiss Francs.

About OKALY-CORUM team:
When Nicolas Grange began sailing twenty years ago, he raced on the Formula 40, one of the great Lake Geneva trimarans that often won the Bol d’Or Mirabaud. Having sailed with Ernesto Bertarelli for a number of years, the Decision 35’s two owners were able to keep up both their love of competition and their ranking among the top sailors on the circuit. In 2003, a new chapter of this story was written. Extreme conditions during the 2003 Bol d’Or Mirabaud decimated the multihull fleet on Lake Geneva, leading many owner/skippers of the time, including Ernesto Bertarelli, Philippe Cardis, Gérard Gautier and Nicolas Grange, to create the world’s first fleet of large multihulls. Thus the Decision 35 project was born. This dream became a reality in 2004, when a spectacular new multi-colored fleet arrived on Lake Geneva and quickly attracted the best sailors on the planet.

Putting his experience to work, Nicolas Grange built up a young, outstanding and motivated crew that could succeed in combining performance with enjoyment. Maintaining friendly ties with Loïck Peyron, he also called on his services and his talent and experience with multihulls to round out the team. His vision brought success: to date, the Okalys-Corum team is the most decorated Decision 35 on the circuit. Its laurels include two consecutive victories in the Julius Baer Challenge and two wins at the Bol d’Or Mirabaud; three at the Geneva Grand Prix*, four in the Geneva-Rolle-Geneva and one at the Beau-Rivage Palace Grand Prix; and many other triumphs on the Decision 35 circuit.

The pioneering Okalys-Corum was the first boat to dominate the Julius Baer Challenge after its victories in 2005 and 2006, a feat later matched by Alinghi, which also won the Julius Baer Challenge after its wins in 2007 and 2008. The taste of victory is all the sweeter as for the past four years Okalys-Corum has been competing against teams made up entirely of professionals (Foncia and Alinghi), whereas its own crew consists of amateurs (with the exception of Loïck Peyron) who participate in an average of five regattas out of eight during the season. Last year, the Okalys-Corum team even finished the season with the same number of points than the Alinghi team. Finally only the number of second places during the season decided the winner between both competitors and offered the first place of the championship to Ernesto Bertarelli’s team.

This website uses cookies to improve your experience while you navigate through the website. Out of these, the cookies that are categorized as necessary are stored on your browser as they are essential for the working of basic functionalities of the website. We also use third-party cookies that help us analyze and understand how you use this website. These cookies will be stored in your browser only with your consent. You also have the option to opt-out of these cookies. But opting out of some of these cookies may affect your browsing experience.
Necessary Always Enabled
Necessary cookies are absolutely essential for the website to function properly. This category only includes cookies that ensures basic functionalities and security features of the website. These cookies do not store any personal information.
Non-necessary
Any cookies that may not be particularly necessary for the website to function and is used specifically to collect user personal data via analytics, ads, other embedded contents are termed as non-necessary cookies. It is mandatory to procure user consent prior to running these cookies on your website.
SAVE & ACCEPT
Go to mobile version
%d bloggers like this: